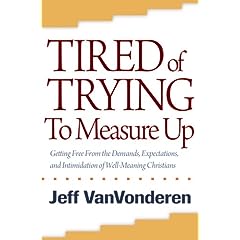 Has anyone ever said that to you?  Has anyone ever seen the way you behaved and said, “Shame on you?”  This phrase implies there is something wrong with you just because you made a mistake or did something wrong.  By saying shame on you, the message you hear is you are a worse person because of your actions and you should be ashamed of yourself.  Sometimes people use the phrase without consciously thinking about the degrading nature of their comments.  They just want to affect change in your behavior, and shaming a person seems to work.

In his book, Tired of Trying to Measure Up, Jeff VanVonderen attempts to diagnose the external manifestations of shame in our lives and provide a remedy for living a freer life.  He argues that shame shows up in two ways:

He goes on to argue that the only way to free ourselves from a life ruled by shame is to rest.  Giving up and trying harder both perpetuate a message of shame that keeps us in bondage.  So long as we give in to the shame or try and overcome it through sheer self-effort we will be controlled by the message of shame and our feelings of low self-worth.  The solution is to rest in the worth and value that God says we have in Christ.

VanVonderen goes through some theological arguments to make the point of our worth.  I found them not as compelling as I had hoped.  I wanted to be overwhelmed with God’s love for me, and I found his arguments about sin and guilt and forgiveness less powerful than they could have been.  For me, I like to think of our value not coming from a forensic forgiveness of guilt, but from an unconditional acceptance into the family of God.  Jesus became man so that we could become gods.  One theologian says that the essence of the Kingdom that Jesus came to bring is in the invitation to us to call God, “Abba Father.”    He came down to commune with us in order to bring us up into communion with the living God.  In Jesus we can become sons and daughters of God.

This helps me.  What I long for more than anything else is this sort of familial intimacy with God.   And my ability to be in a close relationship with God is not based on any conditional behavior.  God accepts me.  Whether I “succeed” in ministry or “fail,” my nearness to God remains unchanged.  I’m God’s son for good, and I like that.

One thought on “Shame on You!”